As you know, the majority of Muslims believe that human beings are ashraful makhluqat which means that humans are the most honourable, supreme, and finest creature that has been created in the universe. Well, are we really so? Let’s have a look at what God has told us about this in the Qur’an:

Surah As-Sajdah, Verse 7: “He, Who created all things in the best, and Who began the creation of man from clay.”

Does God inform us in this verse that He created everything, which he created in the universe, including man, in the best possible way,? Yes, He is…. what else is He saying:

Surah Al-Isra, Verse 70: “And We have certainly honoured the children of Adam and carried them on the land and sea and provided for them of the good (halal) things and preferred them over much of what We have created, with [definite] preference.”

What does this verse mean? As some claim that, does it mean, God has made man superior to everything He has created in the universe, or has He made him superior to many of His creations?

In my opinion, it means that He has made superior to many of his creations but not above all of them. As for me, this verse means that somewhere in the universe, there are other beings that are made lower than us, equal to us or superior to us, and since they are made superior, they are given superior blessings (felicities) and opportunities than the ones given to us.

In fact, claiming that there are no other beings superior to us in the universe is in contradiction with wisdom, science and God’s verses… If you ask why:

Well, would it not be possible that there are older planets than our world in this 15 billion years old huge universe, and in those planets, there are living beings created 500.00, 1 million or billions of years ago? It would be very well.

So, would it not be possible that there are living beings millions of years ahead of us scientifically, technologically, industrially and in terms of wisdom since they were created prior to us? Of course, it would be.

As a matter of fact, God says in Quran that there are living beings in the universe other than us:

Surah At-Talaq Verse 12 : “It is God who has created seven heavens and of the earth, the like of them.”

Surah Ya-Sin Verse 81: “Is not He who created the heavens and the earth Able to create the likes of them? Yes, [it is so]”

As the religion in the presence of God is Islam, I believe that God sent them the prophets declaring His religion and holy books.

The ones lower than us are possibly riding on animals like horse, mule, donkey, equal ones driving vehicles, ships, planes and superior ones using space ships which we express as UFO.

Well, who could be these beings created before us and made superior to us? Let’s take the answer from the Quran again?

God says in Surah Al-Hijr (Verses 26-27): “And We did certainly create man out of clay from an altered black mud. And the jinn We created before from scorching fire.”

God says in the Surah of Al-Kehf Verse 50: “And [mention] when We said to the angels, “Prostrate to Adam,” and they prostrated, except for Iblees. He was of the jinn…”

As you see, the angels and the jinns had been created before human beings.

God says in the Qur’an that (Surah Al-Ma’arij Verse 4): “The angels and the Spirit will ascend to Him during a Day the extent of which is fifty thousand years.” That is to say, the angels are traveling faster than the speed of light in the universe.

He says in the Surah of Al-Jinn (Verse 8-9) that “And we have sought [to reach] the heaven but found it filled with powerful guards and burning flames. And we used to sit therein in positions for hearing…”

According to you, how could the Angels who had been created millions even possibly billions of years ahead of us are going (ascending) to the presence of God at a superluminal speed?

Or with which or how the Jinns could seek the heaven? Before being expelled to the earth together with Adam, how could they find planets and satellites to sit in the universe and listen to the Angels secretly therein? Of course, with the help of their superior knowledge and superior technology that they acquired as a result of that knowledge…

With the help of their superior knowledge and technology, because God says in the Surah of Ar-Rahman Verse 33 that “O company of jinn and mankind, if you are able to pass beyond the regions of the heavens and the earth, then pass. You will not pass except by authority [from God].” That is to say, the Angels and the Jinns acquired the strength, knowledge, information and technology to pass beyond the regions of heavens already ahead of us and ascended to the heaven…

Well, when we ascended to the heaven as humankind? On 12 April 1961 by means of Yuri Gagarin the first person sent by Russians to the space.

I can say in the light of that information that there are absolutely other beings in the universe who are more honourable, superior, given much more knowledge, science and technology than us, and they are visiting our world permanently.

When we examine the earth, we can see a number of traces that they left concerning their visits already.

Today, the most popular one of those is Anunnakis, which is mentioned by Zecheria Sitchin on the basis of Sumerian Tablets. Allegedly, Anunnakis are one of the extra-terrestrial livings who had visited our world and lived herein for a while.

Sumerians had not forgotten to draw the space ships of Anunnakis, so we thank them… The thing you are seeing below is a Sumerian seal. It is seen on the upright corner, an Anunnaki space ship and three persons sitting on it. There is a form similar to eye in the middle of space ship. There is also part of ship similar to a tail… 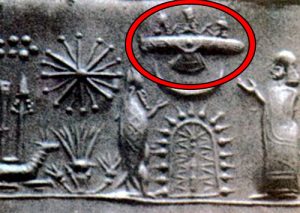 The same ship is described in the other seals as follows…. 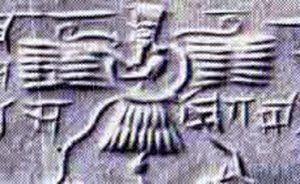 Wide long wings, one tail, a round centre in the middle and an Anunakian sitting in that centre or riding the ship…

The thing that you see below is an UFO viewed at Istanbul Kumburgaz in 2008. 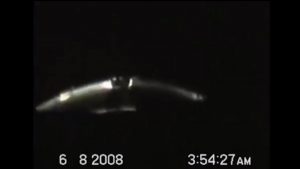 When we look at the UFO more closely, we see that it has a form looking like wide and long wings, a form similar to tail just like in the Sumerian seal, an emptiness looking like commanding centre, the aliens sitting in that  emptiness. Those are looking like sitting there and observing and listening somethings… 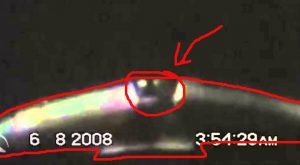 According to you, is not there a great similarity between the UFO drawn in Sumerian Tablets and the UFO viewed at Istanbul? For me, Yes there is…

I don’t know how true Sitchin’s story is… But Sumerian seals are real and presented in museum. Indeed Sitchin produced a number of theories on the basis of those seals with the help of his cultural background.

We also have Al-Quran of which God notified us that He had not left anything as incomplete and told all the things in detail (inside it). God orders in Surah of Al-Infitar “And indeed, [appointed] over you are keepers, Noble and recording; They know whatever you do”… And in Surah of Al-Jinn God orders “And we have sought [to reach] the heaven but found it filled with powerful guards…” And in Surah of Al-Araf (Verse : 27) God orders “…Indeed, he sees you, he and his tribe, from where you do not see them…”

I do not know whether the UFO monitored in Istanbul was an Anunakis UFO or not, God knows the best. However I believe, in the light of verses, wisdom, science, rationality and those images captured likewise that we are not alone in the universe and in the world, there are also other living beings created superior to us, given superior opportunities than us, that someone(s) are observing us permanently.

I also believe that Quran is the holy book, which gives the most magnificent and the most accurate replies about extra-terrestrial life and humankind’s place among those ever so far. I believe in that because God says in His Holy Book (Surah An-Naml Verse 93) that “… He will show you His signs, and you will recognize them…” I saw a majority of the verses. I testify that Holy Book is True…

I will submit the images that you are going to watch to your information. Hope that you think and get advice my dear friends…

In the video you see that a ufo is approaching to the world. But then we see that ufo escapes with a sudden maneuver. We see that the reason for this is that a laser beam is fired to ufo from the world.

Those images are referred to these verses:

God says in Surah of Al-Jinn that the Jinns said “And we have sought [to reach] the heaven but found it filled with powerful guards and burning flames. And we used to sit therein in positions for hearing, but whoever listens now will find a burning flame lying in wait for him.”..

He says in Surah of Al-Hijr (Verses 16, 17, 18) that “And We have placed within the heaven great stars and have beautified it for the observers. And We have protected it from every devil expelled [from the mercy of God] Except one who steals a hearing and is pursued by a clear burning flame.”

I hope that the images you are watching above will help you to know and understand the verses of God and shed light on your questions such as whether are there other living beings in the universe other than us or nor, if any, what could be those living beings…

For that reason, I believe that the countries having advanced technologies capable of making research with the help of a holy book at their hand such as Quran, which explains all the things, about whether are there life in the planets millions of light-years far away or not and that they know all the things indeed but they hide that from us…

For that reason, I request as a world citizen that they do not hide all the information they have about aliens no more, that they share the reality with us even if the religions such as Jewism, Christianity etc., at all costs, would disappear, that they bring the world of humankind from darkness to enlightenment.

Hope to see you at my next article. Good Bye to all of you.

This site uses Akismet to reduce spam. Learn how your comment data is processed.